Welcome back and in a big way, Bathurst 1000 here I come!

Since we last chatted I was able to announce returning to Mount Panorama in October this year, heading up the Supercheap Auto wild card entry.

It is being run by Triple Eight Race Engineering, while in a separate garage it will be the sister car to the Red Bull Ampol Racing Team entries.

No different to when I won alongside my good friend Steve Richards in 2015 and 2018, I can’t wait.

Joining me in the Co-driver seat is young, up and coming driver Declan Fraser, or Decca as we like to call him. He currently races in the Supercars Super2 category, but is no slouch… leading the Championship at the half way point.

I’m confident in what we can achieve together this year at The Mountain. Decca and I are very similar and it’s been interesting working with him over a number of test days and at the Team. He very much reminds me of myself back in 1994, my first Bathurst.

He’s driven, works hard, takes all the information in and is willing to learn. All the qualities you need in a young driver. It’s been great after having the fortune of having a mentor in Peter Brock, to be able to be in the same position to pass that on to the future of our sport. Bring on October.

Outside of the driver’s seat and in TV commentary, it’s been interesting on the Supercars Championship front. Shane Van Gisbergen is in a strong position heading into the back end of the season, but don’t dismiss the challengers. Coming away from Tailem Bend on the weekend it was great to see the competition making him work for it. And it was entertaining racing! There’s still plenty of points on offer and I’m looking forward to seeing how the second half of the season plays out.

Off the track, in June our friends at Tyrepower put their support behind the Prostate Cancer Foundation of Australia’s Walk for Him for Men’s Health Week.

The campaign brought together more than 1,000 men and women from around Australia to raise a whopping $241,498. Driving research, awareness and support that only PCFA can provide.

Tyrepower have been a Major Partner of PCFA for many years and I’m proud to stand by them both. As part of its support for the campaign, Tyrepower generously matched all donations for as part of the Walk for Him Dollar Match Day, raising over $63k in just 24 hours – a massive achievement.

Many of you may have seen Tyrepower General Manager, Rob Smith, leading the campaign, which reached an audience of millions with his national opinion piece.

Not stopping there, Tyrepower then extended its support of PCFA during Dry July, once again providing sponsorship as a Dollar Match Day partner to amplify funding for PCFA Specialist Nurses. In total, the initiative raised $50k, ensuring men and their families don’t have to walk alone when prostate cancer strikes.

Speaking of going the distance – PCFA and Tyrepower have just kicked off the annual campaign for Prostate Cancer Awareness Month in September, launching The Long Run. Register now and you’ll receive a donation gift from Tyrepower.

I’ve made no secret of my family history with Prostate Cancer. But it’s not just me, many of us in pitlane have been touched personally or through our family. As men, we aren’t always great about talking about it. Together with Tyrepower and PCFA, all of us can play a role in making prostate cancer history. If you or your family ever need PCFA’s support, just call 1800 22 00 99 and tell them you’re a friend of ours.

I’ll leave you with a parting thought.
It’s a simple blood test… 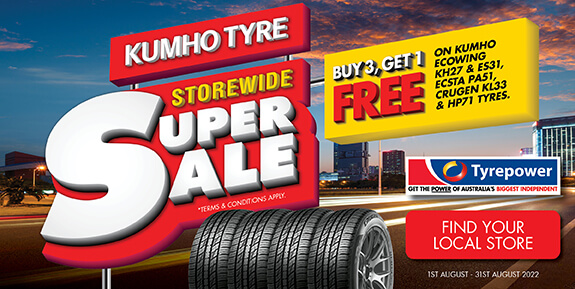